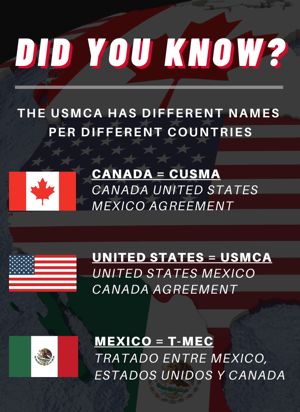 The new trade agreement promises to significantly impact many aspects of the North American economy by facilitating freer trade between the three countries; bringing in stronger investments and creating a steadier job market. The USMCA also addresses recent and emerging critical issues including compliance and regulatory systems, policies on labor and environmental standards, eCommerce and telecommunications, digital trade provisions and the protection of intellectual property.

Compared to the original NAFTA, the USMCA includes several enhancements that impact cross-border shipping regulations and customs. Some of the significant changes are:

Unlike NAFTA, the USMCA does not require exporters to complete a formal Certificate of Origin (COO). Instead, the COO can now be achieved by using informal documentation such as a commercial invoice as long as it contains a set number of minimum required data elements completed by either the importer, the exporter or the producer. The required elements include the following:

While the overall changes from the NAFTA to the USMCA are relatively minor, certain areas of trade have gotten much needed upgrades. Navigating through these changes and adapting to them is critical to your organization's success in trans-border shipping. BTX Global Logistics’ international shipping and logistics professionals are available 24/7 to assist you through these complexities.